Update on some of the adoptable animals previously featured on "Find-a-Home Friday": Diego, Clover, Corey, and Tallulah have all been adopted! Zeke is still looking for his forever home.


Today's adoptable pet is Darla. Darla is being fostered through the Washington Humane Society by an acquaintance of mine who does a wonderful job fostering and finding homes for sweet Pit Bull-type dogs. These dogs are often overlooked in shelters because of the unfair stereotypes and discrimination against their breed. Pitties make wonderful, loving, and loyal pets! 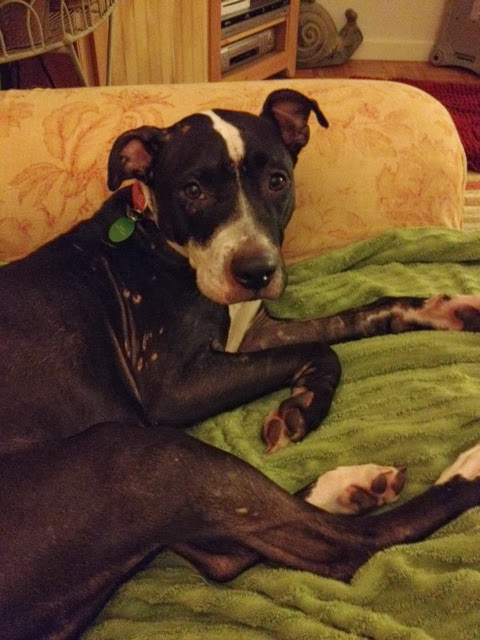 Darla's foster mom says: "When I first saw Darla, she was so thin that you could see every bone in her body. She had been left in an apartment for weeks with no food, and she was barely rescued in time. Darla had every reason to hate and distrust people, but instead she falls in love with every person she meets. She is trusting, loving, sweet, gentle, and is a complete cuddlebug. I do a lot of fostering, so I have a large pack and dogs are coming and going all the time. Darla deserves a home with more consistency and less chaos. She would do best in a home with a submissive dog or by herself. She is incredibly loyal and will love her forever family unconditionally." 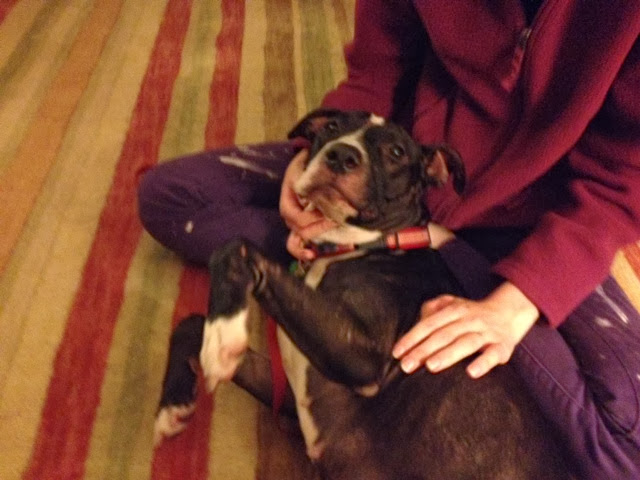 Darla is approximately 3-4 years old. She currently weighs about 35 pounds but still needs to gain a bit more weight; a healthy weight for Darla will be about 40 pounds. 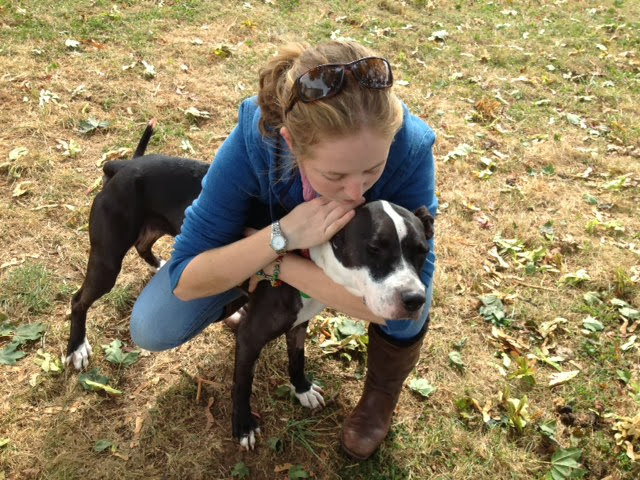 Interested in adopting Darla? Want to get more information? Call or text her foster mom, Gibby, at (413) 427-0471 or email her at gmbbooth@gmail. Darla would love to find a forever family to snuggle up with and keep warm as the weather gets colder!

Beage has been transitioning well to his new home, making slow but steady progress. My aunt says that "he is just adorable and incredibly sweet." I'm so happy that he found such a fantastic, loving home and so excited that I will get to continue to follow his adventures for the rest of his life. Lily is looking forward to having a playdate with him soon :)

I realize that, in the overall context of fostering, a week is not long at all. Some people foster dogs for months, a few even for years, and I'm sure a week, to them, seems like a drop in the proverbial bucket. But until BJ, the longest we'd had a foster was three days. So for me, a week is actually a fairly big deal!

BJ has done much better than I expected in his first week with us. Having been warned by multiple people about his shyness and fearfulness, and having witnessed it firsthand when I went to visit him in the shelter before we agreed to foster him, I thought that by the end of the first week he might still be hiding behind furniture and bolting whenever anyone approached.

Instead, BJ is an attention whore. He was cautious and shy for about the first half a day that we had him, and then he began to follow us around the house, soliciting petting and belly rubs and plopping down in any available lap. His fearfulness still re-emerges occasionally if he encounters a new person or noise, but basically, once he gets used to something he's completely fine.

Similarly, he had a couple of accidents during the first two days that we had him. After those first two days, once he felt safe and had a better idea of our routine, he hasn't had a single accident. Not overnight, not while we're at work, not on the day when we went to work, I came home for an hour and a half, and then we left for a few more hours to have dinner with my family. Again, like the shyness, once he adjusts and feels comfortable, he's fully housebroken.

He loves other dogs. He hasn't chewed anything he's not supposed to. He knows "sit" and "off," which is only necessary to use when he jumps up on your leg to request petting, because he doesn't counter surf or try to get on the kitchen table.

Basically, he's a lovely dog who just needs an adopter who will be patient and understanding about his initial shyness and the fact that he needs a little extra time to comprehend that whatever new thing he's encountering isn't going to hurt him.

Please share his petfinder bio. He deserves a great home! 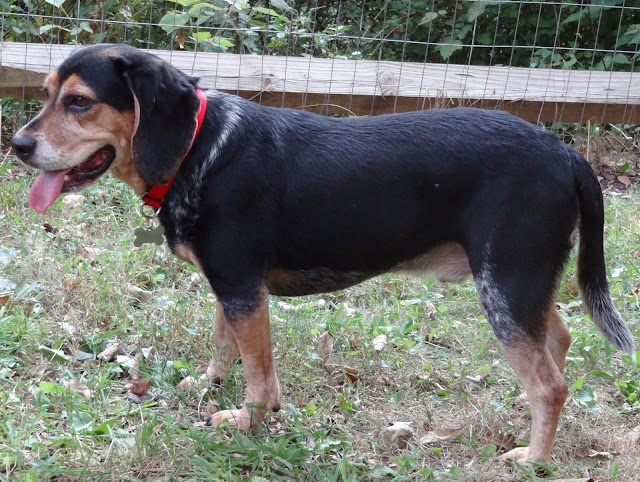 Introducing BJ, Lily's new foster brother! BJ is our first full-time foster (click here for an explanation of the differences between full-time and short-term/temporary fostering) and our first foster through Animal Advocates of Howard County. BJ was adopted from a local shelter as a puppy and returned about a week ago, three years later. He ended up on the euthanasia list at the shelter, but I pulled him yesterday, so now he's safe and hanging out with us until his forever family comes along!

Here are photos of BJ in the shelter: 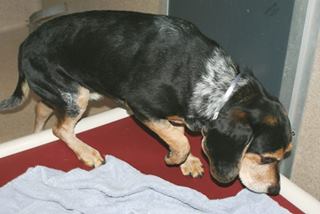 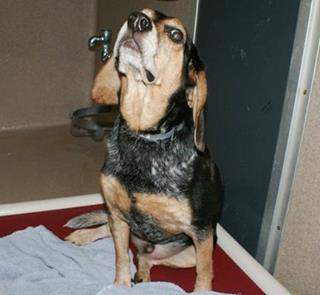 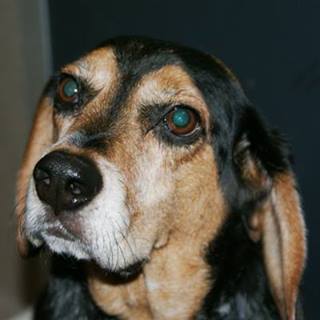 And here are some photos of BJ settling into our home over the past 24 hours:

More to come as we get to know him!


**And yes, in the second photo I am looking at pictures of dogs on Pinterest. Very meta.

(Mostly) Wordless Wednesday: Before and After

You may remember Talullah from the transport in which Peter and I participated recently. This is her "before" photo in the high-kill shelter before she was rescued: 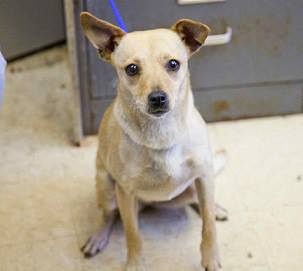 And these are some "after" photos of her on a potty break during transport: 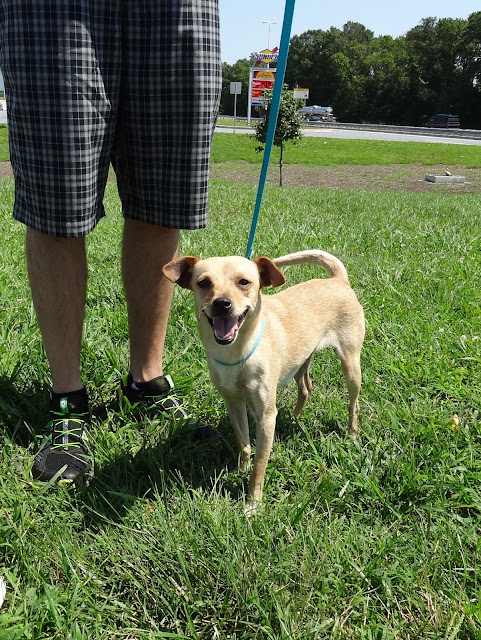 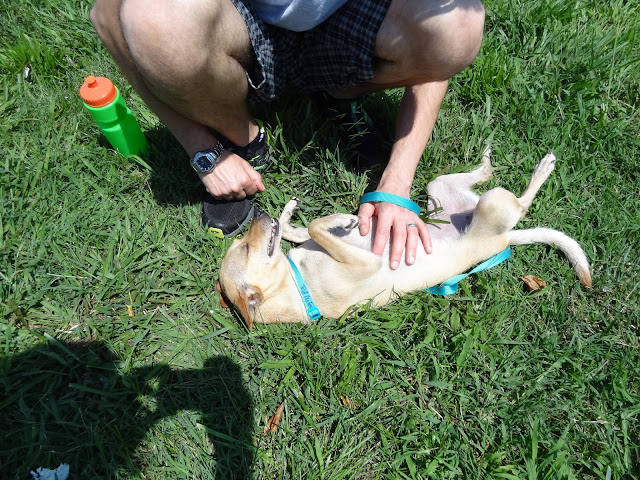 Notice the difference in her eyes, facial expressions, and body language? Dogs understand more than we give them credit for. Imparting this kind of happiness and relief is addictive. There is no greater feeling in the world.
Posted by Katie at 8:41 AM 1 comment:

While pet overpopulation is a massive issue throughout the United States, the problem is particularly acute in the rural deep South where the rates of both spay/neuter and overall adoptions of the animals who do end up at shelters or animal control are lower. In an effort to help save some of these pets, many of whom are highly adoptable in other communities, rescues in states further north often bring up these animals so they'll have a better shot at finding forever homes. Lily was one of these pets; she was in the animal control facility in Pickens County, South Carolina when she was fortunate enough to be selected by Lucky Dog Animal Rescue to make the trip up to the DC area.

Even if there are northern rescues willing to take on these pets, however, there is still one more additional hurdle that must be overcome: how to get the pets hundreds of miles from the high-kill rural Southern shelters to safety with the no-kill rescues. Sometimes rescues have no choice but to pay for transport for the animals; this becomes yet another cost that rescues must incur to save needy, deserving animals' lives. Obviously, it is better for rescues not to have to pay for transport so that they can save their money to help more animals; this is where volunteer transport groups come in. These groups consist of dedicated volunteers who drive pets, often in their own cars, paying for their own gas, tolls, etc., to where they need to go. Many of these groups arrange for the transports to happen in "legs," so that each volunteer drives a shorter distance (generally 50-70 miles one way) and the legs all add up so that the pets end up at their rescues.

One of these such transport groups is Rural Shelter Transports. Peter and I volunteered with them for the first time this past Sunday, driving a dog named Tallulah, two cats named Jasmine and Booboo, and a kitten named Sabine from Baltimore, Maryland to Newark, Delaware. We were able to fit Tallulah, Jasmine, and Booboo's crates side-by-side in the backseat of my car, and Sabine rode in her crate on my lap in the front passenger seat.

Despite Jasmine taking an incredibly stinky poop in her crate about halfway through our drive to Newark, we had a great experience volunteering with Rural Shelter Transports and will absolutely be doing so again in the future. Since Peter drove, I got to spend the whole way to Newark playing with Sabine through the bars of her crate in my lap. I can now say from experience that long drives don't seem nearly as long when you have a kitten to occupy your time! It was also so rewarding to know that we were playing a part in saving these sweet animals' lives, from handsome, stoic Booboo who didn't move or make a sound throughout the whole drive, to regal Jasmine, who loudly protested the indignity of being stuck in a crate with the product of her potty break (I changed the crate pad when we arrived in Newark), to playful Sabine who was constantly sticking her paws out of her crate to solicit play or petting, to sweet Tallulah, who slept through the car ride but wanted nothing but tummy rubs during her potty breaks before we left Baltimore and after we got to Newark.

I am so grateful to the receiving rescues and all the volunteers who made these pets' "jail break" possible. I know that they will all go on to find loving forever families as a result of everyone's hard work, and I am so glad that Peter and I were able to play a small role in their happy endings.